The NH Yates news blog is filled with HVAC tips, updates, and distributor promotions. Be sure to subscribe and stay in touch!

What You Should Know About Legionnaires’ Disease During COVID-19

In this new era of COVID-19, the idea of dealing with yet another deadly illness is a scary thought. But that’s what’s happening right now: Legionnaires’ Disease has become an increasing concern as a result of the COVID-19 shutdown, according to reports. Read on to learn more about Legionnaires’ disease and why you should be aware of it.

What Is Legionnaires’ Disease?

Legionnaires’ is a severe type of pneumonia that affects the lungs—it’s caused by bacteria called legionella (these bacteria can also cause Pontiac Fever). Legionella live naturally in fresh water lakes and streams, as well as in or around human-made fresh water systems, like faucets, fountains, and hot water tanks in your home. They also thrive in industrial fresh water systems, namely in cooling tower systems used in central air conditioning for businesses and industries.  The health risk arises when these bacteria are allowed to grow and spread without being treated, particularly in industrial systems.

Why Is Legionnaires’ Disease a Concern Right Now?

Fresh water used for air conditioning and plumbing systems has been left stagnate in many industrial buildings and businesses that were closed down for COVID-19. As a result, this sitting water gets warmer, creating an ideal environment for bacteria, like legionella, to proliferate. Case in point: The CDC reportedly had to shut down several buildings in Atlanta, including some of their own buildings, due to legionella being found in their plumbing and cooling tower systems.

Is Legionnaires’ Disease Similar to COVID-19?

They do share some characteristics. For example, similar to COVID-19, Legionnaires’ attacks the lungs. It’s also commonly spread through contaminated water droplets that people breathe in through the air. Those most likely at risk tend to be older, have pre-existing conditions, such as diabetes and emphysema, and have weakened immune systems. One thing these diseases don’t have in common: Legionnaires’ doesn’t spread from person to person, in general (although it can happen in rare cases). Also, COVID-19 is caused by a virus, which is different than Legionnaires’, which is caused by bacteria.

How Common and How Dangerous Is Legionnaires’ Disease?

Cooling towers Legionnaires’ is quite common. So much so that it’s standard practice for the water in cooling tower systems to be treated with chemicals that help prevent the growth of cooling tower legionella (which in turn helps minimize Legionella risk). In addition, cooling tower manufacturer Delta Cooling Towers, Inc. has developed state-of-the-art, anti-microbial product technology designed to reduce legionella growth. But how dangerous is it, exactly? 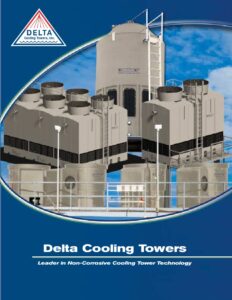 According to data from Centers for Disease Control (CDC), nearly 10,000 cases occurred in the U.S. in 2018, although experts believe that there may have been unreported cases because the illness is often underdiagnosed. Symptoms can include fever, cough, diarrhea, shortness of breath, and more. It’s treated with antibiotics, but about one in 10 people die after being infected. Experts say that even low levels of legionella have been linked to Legionnaire’s disease, and no amount of legionella is considered safe.

How Can You Protect Yourself and Your Family?

One proactive (and preventive) measure would be to choose a cooling tower manufacturer that uses the latest product technology to help minimize legionella growth. Click here for more information about Delta Cooling Tower’s anti-microbial technology.

Dan has been in the sales industry for over 30 years. He is responsible for sales and marketing direction in our entire coverage area while also managing several of our key hydronic product lines. Dan lives in York , PA and graduated from Bloomsburg University with a BA degree in Marketing.

Schedule Engine is your 24/7 customer support solution. Simply plug Schedule Engine into your field service management systems and instantly change how your customers think about you.

Click here to learn more about the power of Schedule Engine.